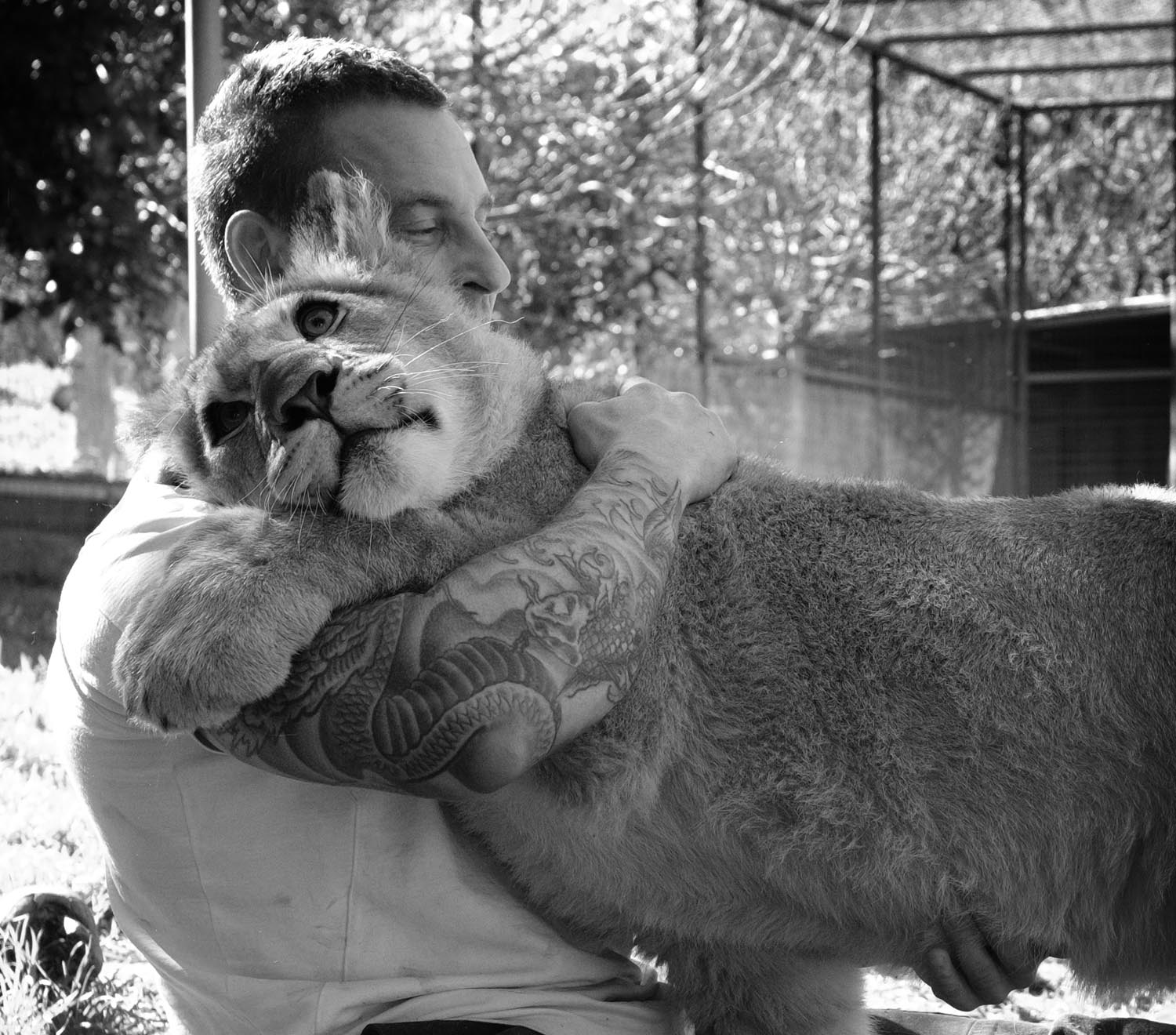 All creeks and rivers flow into the ocean, and somewhere deep in the ocean is the real wisdom. (Ducks water)

It is becoming more of a conscious focus of mine to find and document people who are doing things in this world to make a difference..

At Mogo Wildlife Park, just a few hours south of Sydney, Managing Director and Zookeeper Chad Staples is one such individual who has found his way to help people find their better nature through a connection with exotic animals. However Chad understands, through is own profound connections with the animals in his charge, that deeper connections can be life changing for both humans and animals.
Providing the interactions are conducted with respect and on the animals terms.

To have a small opportunity to capture, on the new FUJINON XF23mmF1.4 R LM WR lens, even just a sense of his relationships with these animals is a privilege. Equivalent to a full frame 35mm lens the versatile 23mm gives a more realistic human eye perspective to an image, this is important especially in documentary photography where getting a true sense of a moment is critical.

Early in the morning Chad spent time with the Meerkats, it was evident in the calm way he immersed himself with these intelligent beings that his affection for them was genuine.

And because the Meerkats were used to interacting with humans, they were unfazed by my presence. One in particular sat on my back and attempted to make a nest in my jacket while I lay on my stomach photographing other family members interacting with Chad. It is so rare and such a privilege to photograph animals like this at such close quarters and with the XF23mm on my X-Pro3 I couldn’t have had a more versatile lens for this scene.

The MOD of the MK l was 28cm but the MK ll’s minimum objective distance of 19cm from the sensor and 9.8cm from the front of the lens made it possible for me to capture Chad and his relationship with the Meerkats while giving me the versatility to capture a Meerkat’s curious face in the lens.

The shallow depth of field of F1.4 allowed for a stunning bokeh affect in the background and there was a reduction in aberration. I am rough on my gear so lying in the dirt and getting dust on this Water Resistant lens was not a problem.

It would have been easy to have spent all day with the Meerkats, just being present in the softness of their company. Moving through the Park were soon stopped in our tracks by the haunting song bursts from the largest of the endangered Gibbon primate species, the Siamang Gibbons.

They are the largest of the Gibbon species and like many animal species are endangered due to the destruction of their habitat by humans.  At Mogo Wildlife Park they live on an unfenced moated island.

The Gibbons were not close enough for the XF23mm to capture them in detail but it allowed for a moment to be still and just absorb their incredible sounds. At the Giraffes Chad eased himself calmly and respectfully into their company as they reached their elegant necks over the fence to greet him and his food bucket.

The MK ll lens’s linear motor gives the lens an incredibly fast auto focus, so much so that I barely noticed that I was using it.

I was impressed by the resolution of the images which were outstandingly sharp. I think most people are seeking a deeper connection to something, to someone or something that goes beyond words, even if they don’t have an awareness of it yet.

With Maji, Chads’ deep bond with his lion cub is something special.

His feelings for her are like a parent child relationship, born from months of bottle feeding and 24hr care from day one.

When he made his way to her enclosure, which is connected to his house (she grew up in the house with him), she was already pacing with anticipation, barely able to contain her excitement and need for his company. Witnessing these unfolding moments of them together were beautiful to capture on the XF23mm Mk ll lens with the fast auto focus not missing a beat.

Fujifilm have always impressed me with the amount of quality they can pack into very light and compact set of equipment. There is no other brand out there, in my opinion that feels like a real camera and that has been able to achieve this.

At just 375g the MK ll is no exception to the rule, it is I barely noticeable on my XPro3.

However I don’t think the same feeling could apply to 50 kilos of lion cub who happily drapes herself over Chad’s shoulder. The tempo slowed down in the presence of Jabari, an 11-year-old Southern White Rhino. In his contented calmness Chad sat quietly on the ground beside him, simply sharing his space.

White Rhinos were thought to be extinct at the end of the 19th century in Africa and are still at risk in the wild due to poaching for their horns. People have to feel something before they take action and before they can feel a sense of responsibility. As Chad said, “you always protect what you love.” The original XF23mm F1.4 MK l is a good solid lens but the new XF23mm F1.4 MK11 has taken it to the next level with its increased resolution, faster autofocus and reduced aberration.
This lens is such a versatile asset and valuable edition to any camera kit and will serve photographers from any genre well into the next decade.