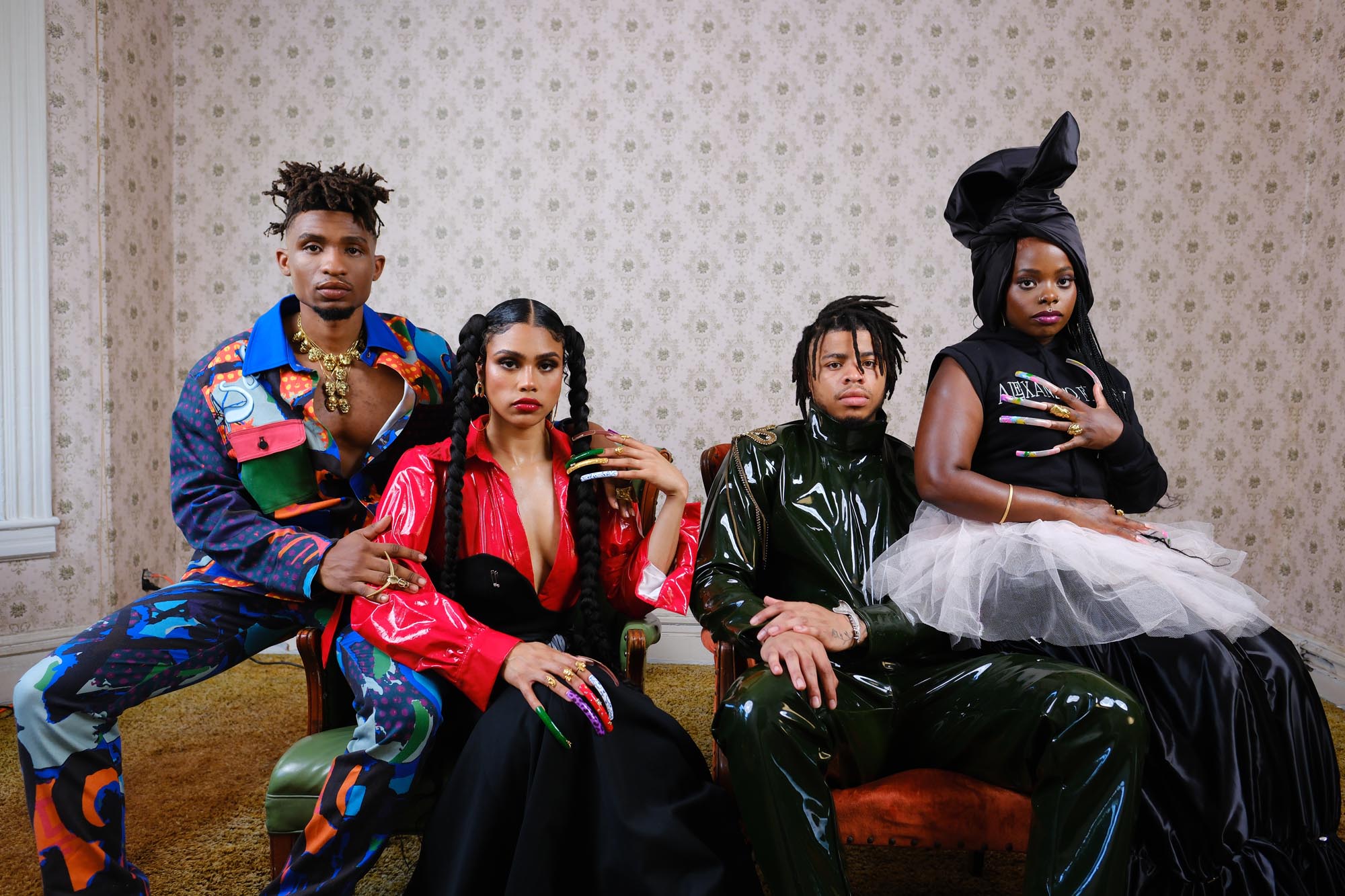 Yolanda Hoskey is a multitalented creator, with a decade of experience across the spectrum of visual arts, film, digital media, and entertainment. Graduating from City College of New York, she holds a BA in theatre, but her post-graduate output proves that artistic development is anything but linear.

Yolanda fights the system by creating bold images of black art, described as “a little creativity mixed with a little ghetto” – a nod to the community where she was raised. An East New York native, she challenges traditional social norms and wears authenticity on her sleeve.

Delving beneath outward façades, Yolanda Hoskey’s photos unpack racial stereotypes with shrewdly observed insight. It’s here we garner a glimpse – and marvel – at the vivid expression of her artistic roots

Sculpted by experience, the fragility of formative years makes for malleable minds. Emerging into an unknown, we’re introduced to a world we have no agency in selecting, and no meaningful say over. Dealt an arbitrary hand, we’re thrust into unfamiliar environments, adapting and adjusting to formations that may make or break us – luck indifferent to our limitations, fortune apathetic to our outcome.

For better or worse, we’re all products of this unknowable game – shaped by chance encounters, molded by our intentions and decisions… striving to make sense of how the past informs our present, and how best to negotiate the potential of our future.

Born and raised in the Louis Heaton Pink Houses of East New York, Brooklyn, Yolanda Hoskey’s beginnings were subject to such random strokes of fate. Managed by the city’s public housing authority, her building was built in the fall of 1959, conceived as a means of providing affordable tenure to those adversely affected by poverty and deprivation.

Following its construction, the neighborhood became something of a flashpoint for criminal activity. In 2000, disinvestment in social accommodation schemes exacerbated an already critical situation. There was no stemming the tide. The decision was devastating.

As basic amenities became inaccessible, drugs and firearms circulated en masse, and opportunistic forces exploited the withdrawal to elicit ends. Residents struggled to deal with the deficiencies of a systemic problem, and for a while, ‘The Pinks’ earned a disreputable reputation as one of the Empire State’s roughest boroughs.

For those living through this period, day-to-day life was a struggle. Survival was the overriding focus, and nowhere was this more pronounced than the impressionable minds of local youth. “Growing up there provided me with a first-hand account. I saw the rawness… the reality. It had a massive impact. Since leaving, I’ve also got a detailed look at how the outside world perceives people like me,” Yolanda observes.

“As a black woman from this environment, I’ve definitely been pre-judged. It’s happened innumerable times. There are things that are just predetermined before anyone even gets to know me. I’ve watched that narrative propelled forward endlessly. I’ve often felt like I’m valued less, because of the circumstances in which I was reared.”

Owing to narrow-minded viewpoints and ill-informed cliches, Yolanda has faced her fair share of detractors, but none of these divisive voices have detracted her from creative passions. In 2017, she attained a Bachelor’s degree in theatre from The City College of New York, and in the past three years, has been producing an array of beautifully realized photographs – most of which center around the importance of uniqueness, and the significance of her personal history.

“When you come from these impoverished locations, you’re automatically perceived as a negative force. I think it’s my job to challenge those assumptions,” she says. “I don’t photograph models… I tend to focus on those who’ve come from similar places to me. They’ve got this complexity and duality that’s really captivating.

“Contrary to how we’re portrayed, I think black people are non-monolithic. There’s no totality – we’re all individuals. It’s layered, and for this project, I felt that was worth exploring.”

In her most recent venture, Yolanda sought to create something that accurately explored her roots, interrogating what it meant to identify memories of these living conditions, and the types of folk populating them.

Taking hold of the new FUJIFILM X-H2 and a selection of prime lenses, she returned to Brooklyn with a host of friends to stage Trendsetters – a succession of dazzling images that truly encapsulate her origins. “I absolutely love X-H2. It’s helped me produce some really strong work. I’m constantly asked if I use film. Everyone’s surprised to discover it’s all digital!

“There’s such a cinematic sensibility about this camera. 40 megapixels of detail brought my ideas to life in amazing ways. The eye sensor reaction times are super-fast – as a portrait photographer, you want the autofocus to be unparalleled, and here, it is.”

The first selection of photos features an affectionate exchange between a family of three – candid snaps of a typical Louis Heaton family, engaged in various domestic activities.

“I wanted to bring these photos back to that household environment,” Yolanda explains. “Black masculinity is a common theme throughout my work. I like to showcase black men as soft and vulnerable, to provide a counterpoint to the widespread stereotypes. They’re always seen as hyper-macho, so I aim to alter that perception.” Referring to images of a father and son engaged in a playful shaving session, Yolanda instils her work with a sense of warmth. The father figure is attentive and demonstrative – right down to the tending of his partner’s hair. Close-ups of a nearby hot comb reinforce the attention to detail, instilling these illustrations with the particulars of a lived experience.

“The intimate familial moments in the bathroom are straight from my past – that’s what my dad used to do with my brothers. As for the haircut, we don’t often see black fathers in this light… using the tools, bending to the styles. I guess it’s an alternative view to what you’re normally accustomed to.”

For the bulk of her childhood and adolescence, Yolanda was raised by her great aunt. In a sense, her pictures represent a kind of wish fulfilment, underscoring a ‘traditional’ family unit that wasn’t entirely consistent in her own life. That said, compassion was a feeling she knew innately.

Money was scarce and opportunities more so, but thanks to the efforts of her adoptive mother, Yolanda was nurtured in what she describes as a ‘house of love’. The sensation is pronounced throughout these photographs.

“More than anything, I think people matter, and the way they have an influence on our lives. I can’t help where I grew up, but there’s nothing about it that I regret. It provided me with a perspective.

“There’s sincerity in these pictures, right down to my aesthetical choices. I show affection between my subjects, expressing intimacy. That’s another thing we struggle with – being emotional, without fear of judgement or ridicule. My mother and father may have been absent, but I always felt seen. More households should be like that, but I also recognize that most of this community are simply surviving.

“I was lucky to be brought up by a woman who had wisdom and vision beyond her years. She instilled this thinking in me: to aspire without limitations. She knew that the environment was solely circumstantial. She understood that it wasn’t definitive,” Yolanda reasons.

Present in spirit, a nearby urn is far more than decorative – it houses the ashes of the woman responsible for Yolanda’s outlook. Defying the direst of expectations to materialize her ambition, this first-hand perspective proved vital when it came to defining the characteristics of the area.

Along with genuine, fly-on-the-wall snaps of a family, she merges the chic of high fashion with the dilapidated backdrop of a peeling apartment, picking apart concepts associated with ‘black archetypes,’ expressivity, and style. “In the context of pop culture, these poor communities are constantly demonized and left behind – but certain aspects of the styles are always sensationalized in the wider cultural sphere,” she explains. “I see a lot of media ridicule for how we present, but when it comes to trends, a lot of those same aspects become fashionable.

“Historically speaking, our presentation has been one of the only things we’ve been able to define ourselves, so it’s very important that we keep that alive. We define it, as individuals. Nobody else.”

Chosen with stylist Ntombi Moyo, outfits for this session highlighted an ironic counterpoint. Framing bodies amongst the scenery of a ramshackle project building, the contrast produces an intriguing effect, heightened by specific techniques.

“For me, there’s a level of crispness you just don’t get with zooms. The range is wider with primes too. I had the complete package – any effect I needed; it was available to me. “I love negative space. I tend to use wider lenses and get closer. It skews bodies and faces and creates this really dramatic effect. That makes for some really interesting imagery – it gives expressions a real strong emphasis.”

As fashions are reclaimed and repurposed, the genuineness of these surroundings situates the style as something raw and true. Self-aware nods to plastic dolls reiterate how social pressures can put upon youngsters – influencing their sense of self-perception, and how they appear to the wider world.

“It isn’t just toys. As kids, we had to be deemed ‘presentable’ before we went outside. The thinking was simple: if you take care and pay attention to your appearance, maybe you won’t experience as many hardships, or reinforce ‘negative’ stereotypes.

“There’s a level of consideration in that idea, but it’s also stifling, in some way.”

Regardless of external forces, Yolanda’s renderings are a rallying call for authentic self-expression, and what it means to distinguish one’s own appearance.

“I paralleled the naturalistic world with high fashion, juxtaposing the two. I’m all about essence. I only snap when I feel like I’ve found that. That’s what connects – when they can see the personality, there in the photo.

“I hope my soul is there too.”