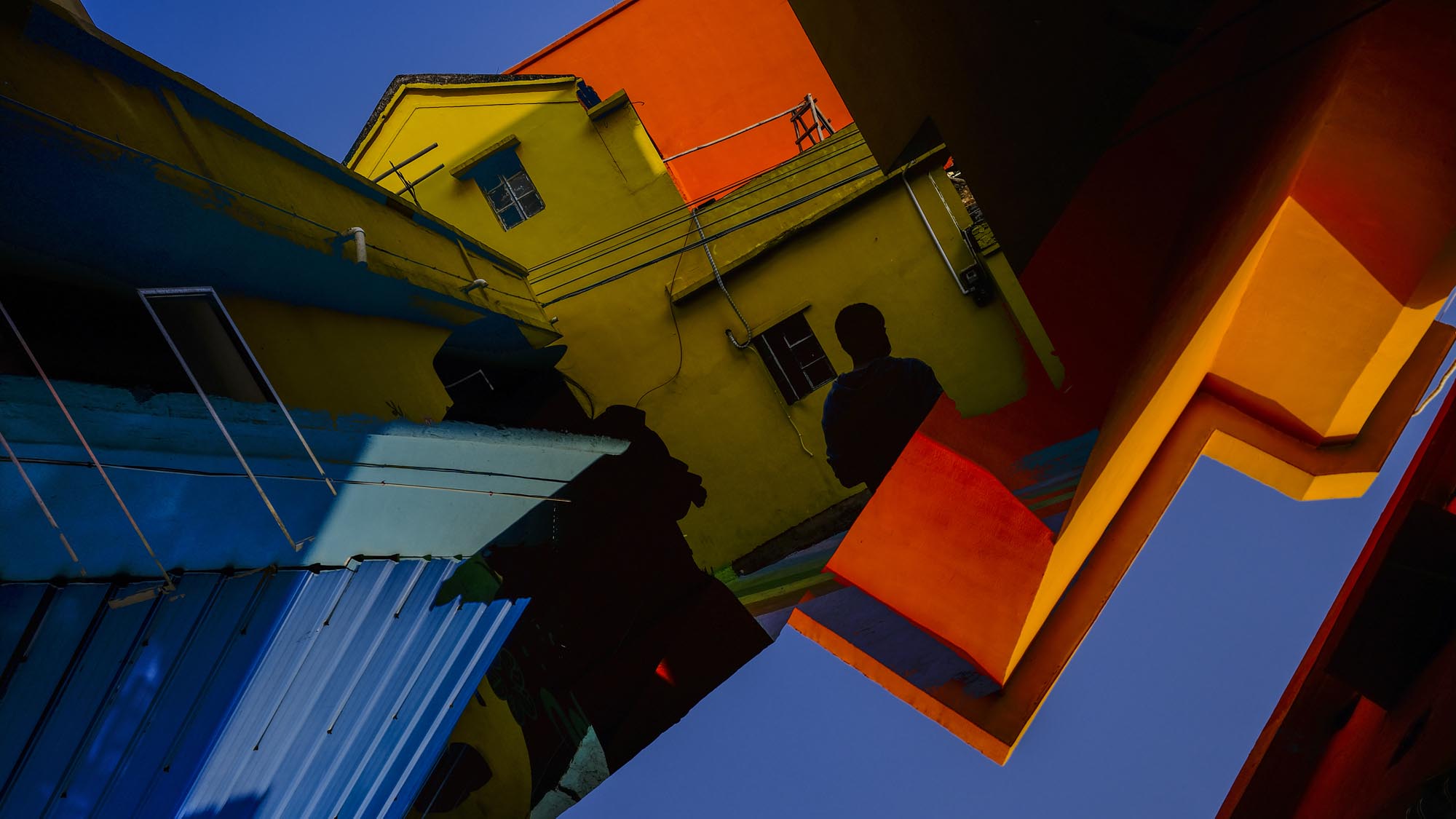 Fujifilm’s new generation XF18mmF1.4 R LM WR lens was both expected and surprising.
In 2011, Fujifilm also released three fixed focal length lenses include a wide-angle prime XF18mmF2 R (27mm in 35mm format equivalent), is also one of the smallest, and most suitable lens for street photography. In fact, we can use vision of 28mm lens to touch a more delicate and tenser world. It embodies the sense of space and depth, which can bring a stronger imagination and visual impact, and the relationship between the subject and the environment is more clearly explained, so called the “sense of immersion” is stronger. X-T4，18mmF1.4 R LM WR，1/500，f8，ISO200. Guangzhou Grand Theater. Spatial perspective is the characteristic of wide angle. The vision of XF18mm is just right, and the perspective distortion is within the acceptable range, the feeling of two-eye viewing is more intimate and delicate. Therefore, with the development of the times and the popularity of smart phone, 28mm lenses are becoming more and more familiar and accustomed to the public. Psychologically, it is also true visually. Because the field of view is wider, there is more room for cropping and recomposing the picture. X-T4，18mmF1.4 R LM WR，1/180，f4，ISO160 Guangzhou Dongshankou. Images at this focal length tend to have a natural and intimate look at each other, with a stronger sense of carryover. X-T4，18mmF1.4 R LM WR，1/15，f8，ISO200，Foshan He Art Museum. This focal length allows for a wider field of view and less perspective distortion than the 16mm lens. A more natural perspective effect can be obtained when shooting horizontally.

Even though the XF18mmF2 lens is compact, the focus speed of the lens has been greatly affected because of its full group moving focus structure. And with the application of a new generation of sensors, people also put forward higher requirements for the image quality performance of the lens. Fujifilm also realized this point. So now the upgrade is coming.

This launch of the XF18mmF1.4 R LM WR lens is clearly sincerer and more surprising than the earlier rumored 2nd generation XF18mmF2 lens. After all, the large aperture professional positioning brings a qualitative leap forward. In fact, it has the highest level of resolution and the smallest chromatic aberration performance in the XF series. The closest focusing distance reaches 20cm (generally refers to the distance from the cmos to the subject, the actual shooting lens front to the subject distance is about 10cm), with excellent bokeh effect. Although it is a large F1.4 aperture, but it is the smaller size of the whole series. Street photography is still not a strain. X-E4，18mmF1.4 R LM WR，1/60，f8，ISO200 Guangzhou. The image quality of the new lens has been improved, with richer and more detailed picture levels. The portraits of people taken at low angles are overbearing and exaggerated, yet not distorted. The large F1.4 aperture can be adapted to darker and more complex environments, even for star photography. X-T4，18mmF1.4 R LM WR，30S，f1.4，ISO800 Multi-shot stack, Daling Mountain, Conghua Lutian, Guangzhou. On the top of a mountain outside Guangzhou, light pollution from the city is still evident in the distance, but the large aperture still allows for a star trail image that is imperceptible to the naked eye.

It is also the large aperture lens in this series to feature a linear motor. This means it focuses lighter and faster, and with face and eye recognition focus modes, it is certainly a great benefit for capturing fleeting street moments. After all, many wonderful street photos are not only a test of the photographer’s prescience, but also rely on the superiority of the lens. The work must be good at what it does! X-T4，18mmF1.4 R LM WR，1/320，f8，ISO200 Guangzhou Dongshankou. For fleeting and exciting images, the response of focus speed is often the key to success.

The FUJINON XF18mmF1.4 R LM WR lens is an all-weather protective lens. Those photographers who familiar with Fujifilm will know that “Weather Resistant” is Fujifilm’s unique title for dust and splash resistant. The lens is fully sealed structure, can effectively protect the lens from sudden rainfall, dust and splashes of water. It allows photographers to withstand more environmental tests in the creative process. The design also adds an A-stop lock button to avoid misuse of the aperture ring. And the focus ring is also suppler, making manual focusing comfortable and precise. In past days of street photography, I would pay more attention to the sense of distance, so that I could obtain a natural state without disturbing the subject, but also to avoid intervening in a psychological safety range of the other party, that’s why I used to use FUJINON XF50mmF2 to shoot. After all, this focal length has a clean image and vivid and rich expressions of the people, but because of the visual perspective, it often lacks a sense of carryover and the tension of the image is obviously lacking. The progression from XF50mmF2 to FUJIFILM X100V’s 23mm vision, and then to 18mm vision, gave me a further appreciation for wide-angle shooting. This is a shift from theoretical understanding to creative work, the closer to the more life. Also opened a new chapter of my street creation.

Whether a professional photographer, or street photography enthusiasts, the upgrade of equipment is to achieve a richer guarantee of creativity. Although this 18mm lens is larger and heavier than the first generation, but the professionalism has been greatly improved. I think Fuji gives photographers more options in terms of lightness and professionalism. Lightweight or professional, it’s all about getting good shots.

I choose it, what about you? X-T4，18mmF1.4 R LM WR，1/250，f8，ISO200 ，Foshan He Art Museum, the tension of perspective often needs to be achieved through the lens. The extension of near and far can give more imagination to the picture. X-T4，18mmF1.4 R LM WR，1/250，f8，ISO200 ，Guangzhou Grand Theater. The best rendering of the sense of space and perspective is often achieved with a wide-angle lens. X-T4，18mmF1.4 R LM WR，1/1250，f1.4，ISO200 ，Guangzhou Dongshankou. The bokeh effect of a large aperture will get a different feeling on the wide angle vision. It can deliver the relationship between the subject and the environment more clearly.