Which GFX Camera Body Is Right for You?

So, you’re thinking of investing in the GFX System? Good choice – you’re about to discover a new level of photographic performance and quality. But, of course, there are three models in the range to choose from – GFX50S, GFX50R, and GFX100. Which is the best one for your style of photography and the pictures you want to make?

Here, we’ll break down the main differences between the camera body models to help you decide which is the most suitable for you. But let’s start with the features they share, rather than what makes them unique.

GFX50S, GFX50R, and GFX100 are all built around the same lens mount and have the same G Format sensor size (measuring 43.8×32.9mm) so FUJINON GF lenses will fit any body in the system. Of course, that means you can decide to own different bodies and share lenses between them, letting you match the body to the type of photography you’re doing. It’s also worth mentioning that FUJINON GF lenses are all designed to offer resolving power beyond 100 megapixels, so lenses won’t lose quality if you change resolution. The models are broadly the same in many other ways, too. All of the GFX system bodies offer shutter speeds of 1/4000 sec to 60 minutes with the mechanical focal plane shutter and 1/16,000 sec to 60 minutes with the electronic shutter. ISO range is identical at 100 to 12,800, and extendable from 50 to 102,400. Metering and exposure modes are the same, too, as is the level of exposure compensation offered at +/-5EV steps.

How Much Resolution Do You Need?

Of course, GFX50S and GFX50R have plenty of pixels to play with, allowing huge prints and heavy cropping, but if you need the ultimate in resolution, and all the extra benefits this brings, then GFX100 is for you. With GFX100, you also get slightly more latitude in editing, as there’s access to 16-bit RAW files, while GFX50S and GFX50R top out at 14-bit, though that’s ample colour depth for most situations.

Do All GFX Bodies Have Image Stabilization?

Some FUJINON GF lenses have an Optical Image Stabilization (OIS) feature, which compensates for camera shake and improves image sharpness, especially at slower shutter speeds when composing handheld. That’s the extent of stabilization that is available if you’re using a GFX50S or GFX50R body, but it’s still a huge help for all sorts of subjects, from impromptu family photos to street-style pictures, and helps to get the maximum detail from the high-resolution sensor.

However, GFX100 has an In-Body Image Stabilization (IBIS) function, which moves the sensor to compensate for vibration, offering additional benefits. With IBIS, not only can stabilization be applied to any lens combination, it’s offered across five axes, so can be more accurate and more powerful, allowing up to 5.5 steps slower shutter speeds to be used.

How Much Speed Do You Need?

The GFX System is designed to maximize image quality, but there are also options for continuous capture if you need it. On GFX50S and GFX50R, you’ll get up to 3fps for up to 13 frames when using RAW image quality, but unlimited JPEGs – depending on your card space, of course!

GFX100 also employs a phase detection AF system, rather than the contrast detection system used on GFX50S and GFX50R, and this leads to a faster autofocus performance.

What Are the Video Options?

As well as other video refinements, GFX100 records higher-quality 10-bit 4:2:0 video internally to the SD cards and 10-bit 4:2:2 video to an external device. So, if video is a driving force in your choice of camera, it’s the way to go in the GFX System.

What About Dimensions and Handling?

Aside from pure specifications, this is the area where each of the GFX System bodies really offers something different, and photographers can choose the option that best serves their needs.

GFX50S and GFX50R are essentially the same camera, but in very different bodies. The original GFX50S and GFX100 are styled more like DSLRs, whereas GFX50R has a rangefinder design. This means it’s smaller and lighter, so more suited to on-the-move photography styles like street. It also has its electronic viewfinder arranged on the left side of the body, whereas GFX50S and GFX100 have the viewfinder placed centrally. Both of these bodies can also accept the EVF tilt adapter EVF-TL1 accessory, but GFX50R cannot. GFX100 also has a much larger body, with a vertical shutter release, built-in grip for easier shooting in portrait orientation, and it can accommodate two batteries for extended shooting. GFX50S can also use two batteries and is compatible with the Vertical Battery Grip VG-GFX1 accessory.

All of the bodies in the GFX System feature a 3.2-inch 2.36 million dot LCD touchscreen for easier control and image review, but there’s a difference there, too. GFX100’s screen has a three-way tilt mechanism, while GFX50S and GFX50R screens tilt up and down. 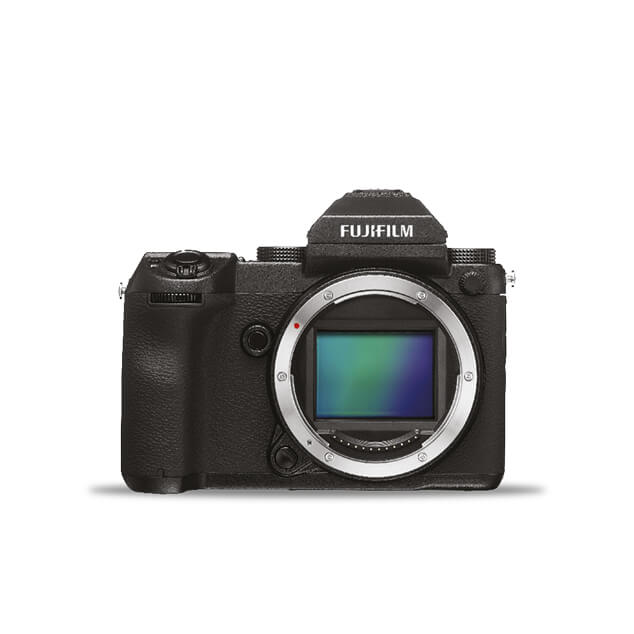