The fundamental settings of shutter speed, aperture, and ISO work in harmony together to control the brightness of a photograph and much more. Here’s what you need to know about the trio...

The brightness of the pictures you create with your X Series camera is controlled by just three camera settings: shutter speed, aperture, and ISO. Even when you make images in an auto mode, it’s still these three factors that are being balanced behind the scenes by your camera’s electronics. Getting the right combination of shutter speed, aperture, and ISO is critical to making pictures that are not too dark and not too bright, but each also has valuable secondary effects that can unlock the door to creative photography.

Let’s have a closer look at each of these settings:

Shutter speed, aperture, and ISO are related, and we can trade one off against another. For instance, we can create identical photos of the same brightness by:

In fact, there are lots of combinations of shutter speed, aperture, and ISO that will create the correct brightness in a picture. This begs the question: does it matter which combination you use? Well, yes it does, because different apertures and shutter speeds can affect how an image looks in other ways, apart from brightness. We’ll come on to look at these in a moment. But first, let’s have a look at how to get away from auto mode and take control of these fundamentals. For X Series cameras with a mode dial: Set the mode dial to S for Shutter Priority. You’ll now be able to adjust the shutter speed using the camera’s rear command dial For X Series cameras with a mode dial: Set the mode dial to A for Aperture Priority. You’ll now be able to adjust the aperture using the camera’s rear command dial 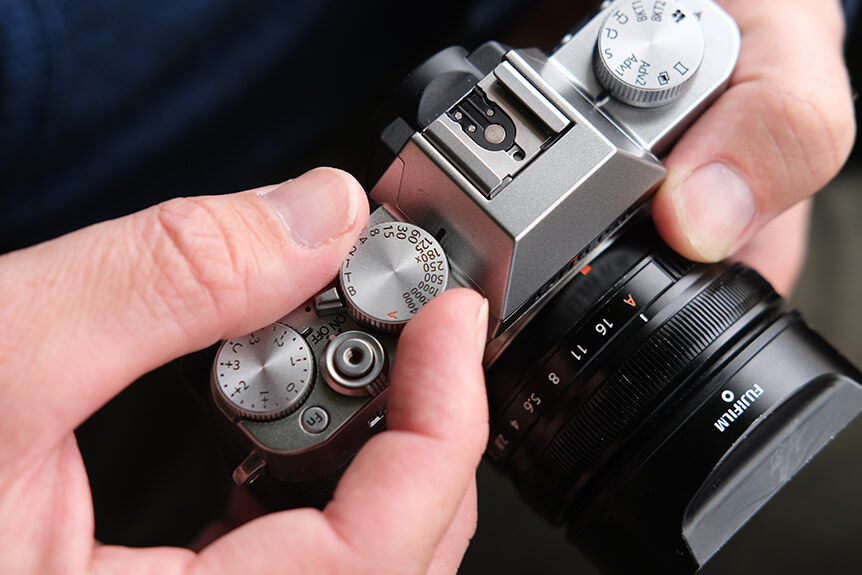 For X Series cameras without a mode dial: Engage Shutter Priority mode by setting the lens’s aperture ring to A and the shutter speed to any numerical value 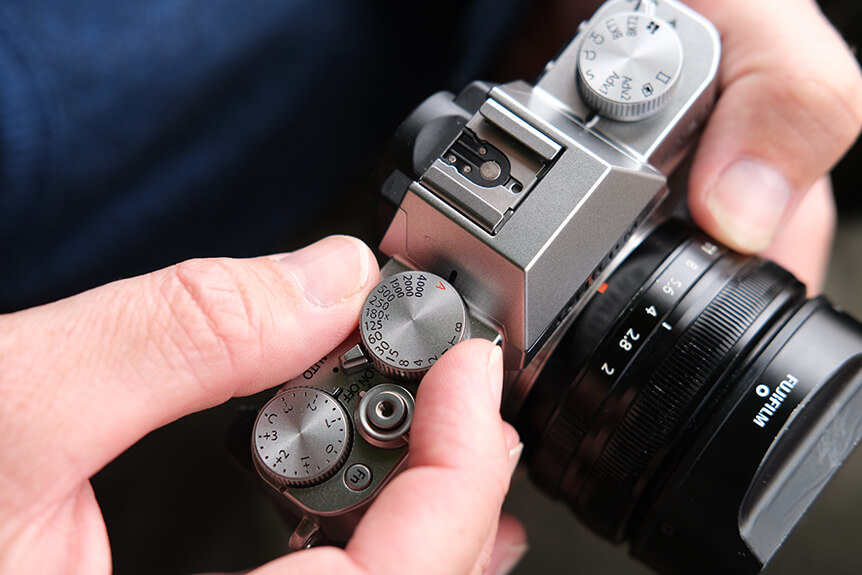 For X Series cameras without a mode dial: Activate Aperture Priority mode by setting A on the shutter speed dial and any numerical value on the aperture ring

In Shutter Priority mode, you’ll be able to adjust shutter speed independently, with the camera picking an aperture to match. Notice how values shorter than one second are represented by whole numbers (ie 250 for 1/250 of a second) while speeds longer than a second have a symbol after them (ie 4” for four seconds).

Apertures are labelled somewhat differently: large sizes have small numbers, while small sizes have large numbers. It’s confusing when you start out, but don’t worry – you will get used to it! Like shutter speeds, apertures can be changed in stops (and thirds of a stop), with each stop representing a halving or doubling of the amount of light entering the camera.

In fact, as you change the aperture value, you should notice the shutter speed changing by the same number of stops in response.

We haven’t talked about ISO much yet, but the principle is much the same. Starting at ISO 200 (the lowest ISO value on many, but not all, of our cameras), the sensitivity doubles every time the ISO value doubles – an increase of one stop.

The stop system is what links shutter speed, aperture, and ISO together. Change one of them and another has to change in response to keep the brightness the same. Or to put it another way, changing any of these three settings by one stop will have the same effect on brightness.

This three-way relationship is often represented by the exposure triangle, which is a useful diagram to remember when trying to recall how these fundamentals of photography work together.

Why Use Different Aperture and Shutter Speeds?

So, if different combinations of shutter speed, aperture, and ISO give identical brightnesses, why bother worrying about which ones we use? Good question! It’s because of the other things that shutter speed and aperture do to a picture.

Shutter speeds control how moving objects are reproduced, and apertures affect how far behind and in front of the point of focus looks sharp – something photographers call depth-of-field.

Check out our video below to learn more about the exposure triangle.